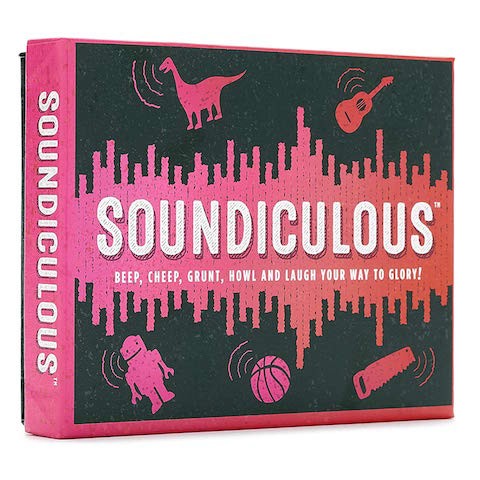 Playing Soundiculous is hilarious. Suitable for all the family aged over eight, this set of cards is perfect for holidays and family gatherings.

To play think charades without the acting. It's easy to play: take five cards for each player (they are rated easy and moderate and hard so if playing with younger children start with easy. The oldest person plays first by taking the first card in the pile, deciding which of two to make the sound of, sit on her hands and and let the fun commence.

I don't think I have laughed so much in ages. I won't say which card produced the guess of "vomit to once side and then the other" and the person making the sound can only nod if someone is close. No speaking!

My daughter was furious that no one guessed her dolphin sound and found a YouTube recording to prove her point afterwards. Some of the sounds are really easy like a clock or phone but what noise does a hospital make?

Up to ten people can play so this game is ideal for family gatherings or maybe kids parties.

from Gamely is available from Amazon